Crealies, They Color My World

Today, we have Lisa as guest designer.
She made this beautiful layout. 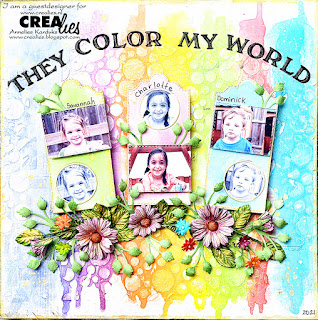 Hello Friends!
Today I have for you a 12x12 layout created with the wonderful products from Crealies.
I wanted to use their mixed media products, especially the Pigment Colorzz.
I have had this idea in my head for a while. I finally put it to paper!
I started with a patterned paper that had a beautiful vintage design, but a muted light color. I used the Stencil Paste and applied it to the Circles with Rough Edges stencil using the Large Paste Spreader. I adore the Spreader as it is made of metal, and gives a perfect edge when used. For smaller areas, you could use the smaller Spreader.

Once it was dried, I mixed my 7 colors in a paint mixing tray, and all you have to do is spray a little water in each of the reservoirs in the  paint mixing tray, and give the Pigment Colorzz a few taps into each puddle of water. Let it sit for a minute and stir each color. Using the Spray Bottle (pen), spray your prepared layout with a light mist of water. Starting with the first color, using a paint brush, wiggle  the color onto the wet layout and watch the colors start to bleed into the paper, tipping the layout up and down vertically to let the color drip toward the edge. The Pigment Colorzz I used from left to right were, Purple, Pink, Orange, Yellow, Spring Green, Red, and Turquoise. Let the entire layout dry. Then I used Pearl Powder Gold mixed with water and spattered the entire layout. I also painted the edges with the gold. 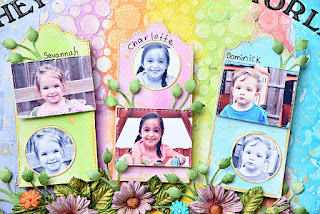 I die cut 3 Big Labelzz & Tagzz using the watercolor paper and die cut some circles into the tags using the Elements Circles die, then mounted it onto some heavy chipboard.
I used some of the Pigment Colorzz I had in my paint tray, and color washed the tags.
I edges them in the Gold and gave them some spatters as well. I printed out the photos, die cut their faces using the same Elements Circle die. Then I inlaid the black and white photos into the tag. I used one of the smaller Rectangles die for the color photos. Because the rectangles were to long, I repositioned the die after the photos were cut, and die cut them again. This ended up to be the size I wanted, a little shorter. I placed some corrugated cardboard under the photos and  adhered them onto the tag. I wrote their names on each tag, then mounted them onto the layout. I painted a piece of the water color paper with the Olive Green, then die cut the leaves with the mirror image using the entire sheet of paper.
I tucked in some of the die cut leaves into the photos. 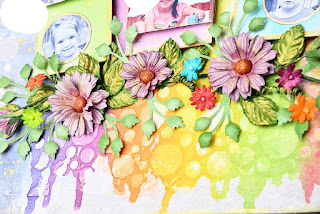 I placed some purple flowers under the tags, and with the Pigment Colorzz, I painted some of the tiny flowers using different colors. I added the gold to the leaves and flowers, and tucked in some of the die cut Leaves around the cluster.
I die cut the title using the Alphies Dies set in Capitals using black card stock and adhered them to the layout. I used some glitter pens to highlight the letters. This layout is done. 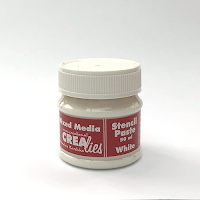 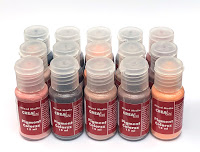 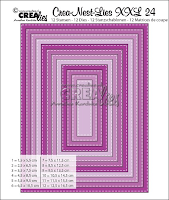 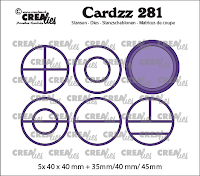 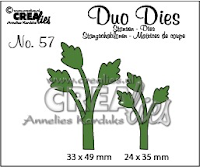 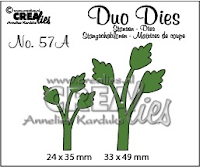 Lisa, thank you for your beautiful creation.
Soon you can also see this on Lisa's blog.
Gepost door Ingrid op 07:00 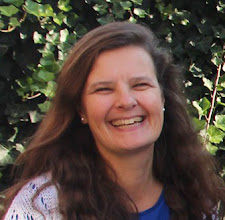 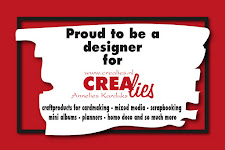